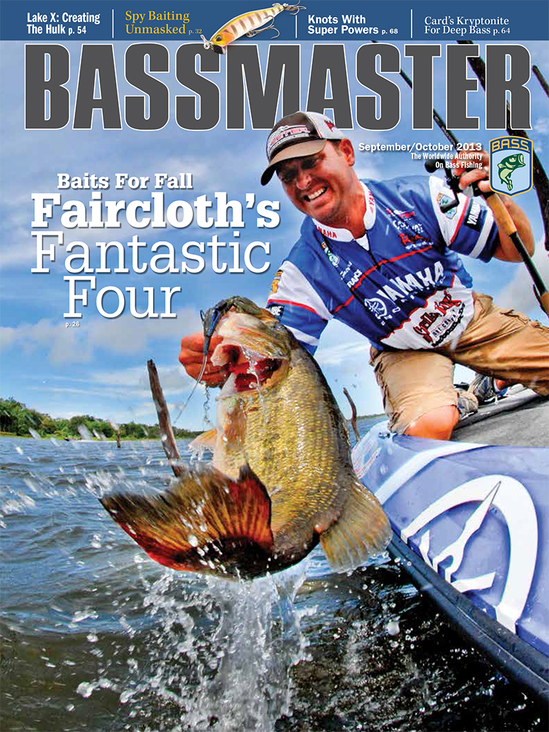 Year 2013 is remembered for DUO for many reasons, but one chapter that is definitely be written in big bold letters is be the one on spybaiting.

Since ICast 2013, where we introduced the world to “Spybaiting – Technique of Silent Capture”, it has turned in a movement and Realis Spinbait 80/90, the vehicle for the technique, has made rounds around the world`s fisheries and magazines.

The first who have given spybaiting some “love” have been great people at Bassmaster Magazine, who have went as far as gracing the cover of the September issue with the Spinbait picture.

And what did they have to say about the phenomena that spybaiting was quickly becoming? Read more below…

Realis Spinbait on the cover of Bassmaster Magazine

The Japanese are calling this the “technique of silent capture.” However, the spinbait is likely to make a lot of noise in U.S. tourneys.

DAVID SWENDSEID RECALLS the secrecy that shrouded “flick shaking” before he brought it to the U.S. for Jackall Lures a few years ago. The research and development specialist sees a similar situation playing out with Japan’s latest emerging technique called “spy baiting” that incorporates a new
hybrid of lures, often called “screw baits.”

“Flick shaking remained a secret with Japanese pros for two or three years before it got out to the public,” says Swendseid, who now serves as R&D project manager with Realis, the bass division of Japanese lure maker Duo International. “The same holds true for screw baits right now. It’s a tactic the Japanese pros are keeping to themselves.”

Swendseid and Realis are rolling out the Spinbait 80 screw bait to the U.S. market this year. Like most screw baits, it consists of a slender, hard plastic, baitfish-like body, similar to a jerkbait, with a small propeller fore and aft. The bait sinks and basically has a do-nothing action except for the spinning props and a subtle shimmy action. Simply cast it out and wind it in.

Swendseid says lure makers have expended a lot of effort in recent years pushing erratic action to trigger bites, yet screw baits fall on the opposite end of the spectrum.

“It’s a finesse bait that offers a different presentation for those heavily pressured lakes,” Swendseid says. “It’s best suited for clear lakes when bass and bait are in that neutral feeding mode, together and not interacting, which often occurs when there is a lot of fishing pressure.”

As bizarre as the concept of slowly winding a propeller stickbait beneath the surface may sound, it’s been catching a lot of bass in Japan.

“It’s been hot over there, but very few are talking about it,” Swendseid insists. “Guys on the Japanese bass circuits have been very quiet about it.”

Even so, he says, Japanese anglers have embraced the screw bait concept despite the lack of a winning record from any major tournaments.

The craze began on Lake Biwa, Japan’s most popular and largest bass lake, where Manabu Kurita caught a 22-pound, 5-ounce largemouth in 2009, tying the world record.

“According to Japanese reports, anglers got creative a few years ago and began fashioning propellers in front of soft plastic baits and hard baits,” Swendseid notes. “Word got out that they were catching fish, so guys started adding propellers to swimbaits and jigs and began catching bass over the top of grass that they hadn’t caught before.”

Manufacturers got wind of it, and the concept evolved into a petite jerkbait body to best resemble small baitfish. Tiemco rolled out the first, and the bait became very popular on the eastern side of the Kanto region, near Tokyo. That triggered more production models, including Realis’ Spinbait, which Swendseid tested in American waters this spring.

“I took the Spinbait 80 to the Columbia River and caught several bass while fishing it over the flats and
along the breaks,” he says. The Spinbait’s tiny props are cupped at the edges, which cause them to spin under the slightest forward movement. 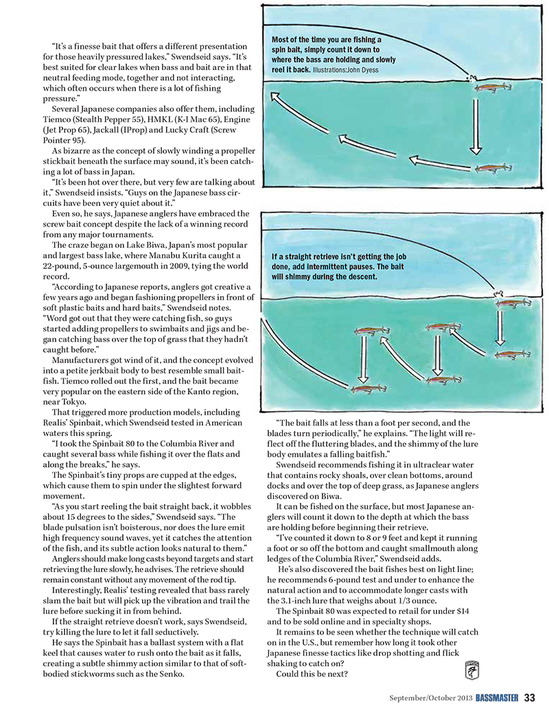 “As you start reeling the bait straight back, it wobbles about 15 degrees to the sides,” Swendseid says. “The blade pulsation isn’t boisterous, nor does the lure emit high frequency sound waves, yet it catches the attention of the fish, and its subtle action looks natural to them.”

Anglers should make long casts beyond targets and start retrieving the lure slowly, he advises. The retrieve should remain constant without any movement of the rod tip. Interestingly, Realis’ testing revealed that bass rarely slam the bait but will pick up the vibration and trail the lure before sucking it in from behind.

If the straight retrieve doesn’t work, says Swendseid, try killing the lure to let it fall seductively. He says the Spinbait has a ballast system with a flat keel that causes water to rush onto the bait as it falls, creating a subtle shimmy action similar to that of softbodied stickworms such as the Senko.

“The bait falls at less than a foot per second, and the blades turn periodically,” he explains. “The light will reflect off the fluttering blades, and the shimmy of the lure body emulates a falling baitfish.”

Swendseid recommends fishing it in ultraclear water that contains rocky shoals, over clean bottoms, around docks and over the top of deep grass, as Japanese anglers discovered on Biwa. It can be fished on the surface, but most Japanese anglers will count it down to the depth at which the bass
are holding before beginning their retrieve.

“I’ve counted it down to 8 or 9 feet and kept it running a foot or so off the bottom and caught smallmouth along ledges of the Columbia River,” Swendseid adds.

He’s also discovered the bait fishes best on light line; he recommends 6-pound test and under to enhance the natural action and to accommodate longer casts with the 3.1-inch lure that weighs about 1/3 ounce. The Spinbait 80 was expected to retail for under $14 and to be sold online and in specialty shops. It remains to be seen whether the technique will catch on in the U.S., but remember how long it took other Japanese finesse tactics like drop shotting and flick shaking to catch on?

Could this be next?

This error message is only visible to WordPress admins

Make sure this account has posts available on instagram.com.